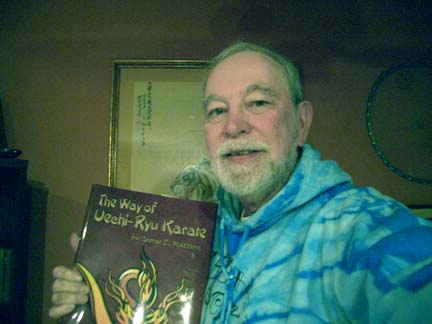 Editors Note: The titles used in martial arts vary according to the different associations. When I tested for my Renshi, this examination took place at the Chairman of the Okinawa Karate Federation’s dojo following my 6th degree black belt test. Upon successfully passing this examination and test, I was allowed to put one gold bar on both ends of my belt. Typical political issues intervened and shortly after this, individual organizations began their own method of issuing these titles.

When IUKF was formed, one of my goals was to reinstitute the policy of defining exactly what the titles/gold bars represented to the Uechi community and to create a new policy regarding the earning of the titles that followed the original All Okinawa Karate Federation’s intent.

Naturally, this effort has been difficult. Once such a procedure is ignored and students automatically sew on a gold bar when promoted to the physical rank of Rokudan, it is hard to inspire newer members of our community to suddenly accept the notion that the titles were created to honor individuals who have accomplished more than simply physically being able to perform kata and fight. Certainly, achieving this level of physical proficiency is a huge honor in itself, but it doesn’t warrant what the spirit of the titles originally intended.

The titles were a special honor that represented the holder had “given back” something to the Uechi community; accomplished something that benefited our community.

Again, every organization can use these gold bars in any way they wish. IUKF wants them to mean something that represents the original meaning the Grand Masters on Okinawa meant them to be when they were created.

Letter of Recommendation
The candidate who is nominated for a title is responsible for providing a formal letter(s) of recommendation from a senior in Uechi-Ryu Karate. An email recommendation is acceptable or an attachment.

Resume that includes the following materials:
a. Educational background: Provide a chronological time line of your study of
Uechi-Ryu Karate. This would include length of study, instructor (s), promotional
dates, etc.

b. Teaching Experience: Show evidence of where you have taught Uechi-Ryu Karate
and length of time.

d. Publications, if any, that contributed to the art of Uechi-Ryu Karate.

e. Professional recognition, if any, this can include a listing of awards or special
recognitions given to you from your peers in Uechi-Ryu Karate.

Special Contributing Project
The IUKF Board encourages candidates seeking a senior title to share their knowledge and expertise with the Uechi-Ryu Karate community. A designated space on the IUKF website will be provided in order for all seniors to share their expertise with the Uechi-Ryu Karate community at large. A member of the Titles Committee will be assigned to the candidate for guidance and direction. Suggested areas of subject/work-life experiences that a candidate might want to submit are:
a. Written article
b. Film/DVD
c. Project
d. Reflection paper of candidate’s years in Uechi-Ryu Karate

Renshi:
1. 20 years of continuous and active training and/or teaching in Uechi-Ryu Karate.
2. Godan (5th degree black belt) or above or a yondan with exceptional qualifications.
3. 36 years or older (Justification:”adult” black belts are issued at 16 years old)
4. Recommendation from a member of IUKF who has a minimum title of renshi or above.
5. Documented attendance and/or presentation at Uechi-Ryu related seminars and workshops.
6. IUKF member for at least one year?Award: One gold bar or stripe on black belt
Award: One gold bar or stripe on black belt

Kyoshi:
1. 30 years of continuous and active training and teaching in Uechi-Ryu Karate.
2. 7th degree black belt minimum
3. 47 years or older
4. Recommendation from a member of IUKF who has a minimum title of kyoshi or above.
5. Documented attendance and/or presentation at Uechi-Ryu related seminars and workshops
6. IUKF member for at least one year
Award: Two gold bars or stripes on black belt

Hanshi-sei:
1. 50 years of continuous and active training and teaching in Uechi-Ryu Karate.
2. 8th degree black belt minimum
3. 65 years or older.
4. Recommendation from the IUKF Board.
Award: No special belt designation for Grand Master at this time.

3. Recommendation of candidate for title will be forwarded to the IUKF Board for
approval. Approval must be a 2/3 majority vote.

RIGHTS OF APPEAL
Any candidate who is not awarded a master title may have the rights to appeal the decision. By the candidate’s request the IUKF Board must give written justification of their decision and also provide guidance for completion of a senior title at a later date.

Kyhon for sale – Good Cause!

Can this website be updated? I am trying to find Titles application Recommendation form. Marjorie Swift