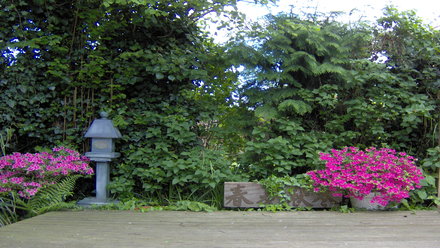 Three years ago I decided that it was time to build my own private dojo, several reasons why. Firstly the recession was on the horizion and I needed to reduce my overheads. Secondly and most imporntantly I needed my own space to work and teach in after 35 years of training, and researching the Oriental Martial Arts. Thirdly the weather here in the UK is inclement, that an outside decked area only provided me with training for a limited time of each year, and lastly, I was down to my last £2000 in the bank and the way things were going I would have nothing to show for my efforts as a professional martial arts instructor.

Today I will say that it was a good decision, even though the cost of materials for the dojo left me broke at the time. Ok three years later I am still struggling, but I am still here and things are looking up. Slowly but surely the class sizes are growing again and I think maybe in about twelve months time I will be able to say it was the best thing I ever did, I hope.

I called on a builder friend I knew and asked him if it were feasable to build a Dojo in my garden, he said that the planning rules have changed and that permitted planning would allow me to build as long as the building was a wooden structure and fitted into a strict set of rules regarding how far away the building is to be from the house, then I was able to build around 50% of the land. With this in mind I began to measure up and draw myself a few plans and put some ideas down on paper. Once I was happy with my design I measured up how much material I would need and once again asked my builder friend if he could help. He was able to get me all the materials I would need to build the frame work, and thank you Steve for supplying these at a really low cost.

Ok the frame was covered now I needed the 8′ x 4′ sheets for the walls and roof. I began asking around and one of the students said his boss was moving their warehouse and he had some of these boards laying around, he said he would ask if we could have them. Well the van turned up with enough boards to get the project finished, and they were donated, and a very big thank you to Dave for his help.

By the time I had all the material togther it was mid winter. I Began work in January straight after Christmass.

The first thing I needed to do was clear the land where I was planning to build the dojo, and it was a relative forest of plants trees bushes and a very large ornimental rockery with enourmouse stones.  Although back breaking work I managed to clear the land in eight weeks. Sensei Dan lent me a mulshing machine that helped me reduce the trees into bags of wood chips. Dan also helped me reposition my tool shed to the other side of my outdoor dojo, as the new indoor dojo was to be added to my out door area. I re distributed the stones around the garden and used the bigger logs to make a nice border area, which today looks really nice. The weather was cold and it rained most of the time I was clearing the land.

THE OUTDOOR DOJO BEFORE I CLEARED THE LAND

Once the land was cleared, I began to lay the floor area, I was lucky with the foundations as on the right side I had the old foundation concrete for the relocated shed and on the left I had filled in a large pond with concrete so these acted as my footings. Once the floor area was in place I put the four corner uprights in place, ready for the roofing beams.

I was really lucky with weather although cold the sun was out. It was around March and April.

THE FLOOR INPLACE READY FOR THE ROOFING BEAMS

I asked my lady ‘Fran’ to help me raise the beams, once the edge beams were in place I began to put together the roofing beams.

ALL THE FRAMEWORK IN PLACE READY FOR THE WALLS AND ROOF

Once the frame was up it only took a couple of days to get the walls and roof in place, which really made the project come to life. Although I was enjoying the experience at this stage I became excited at the prospect of the finished artical.

THE WALLS AND ROOF IN PLACE

As my intention was to make a traditional Okinawan looking building I set about making the windows. I was a little concerned as to how I was going to replicate the paper look, I did have a few ideas in the back of my mind, and when I looked into how much it may cost It became a slight issue, anyways un perterbed I carried on regardless and knew that a solution would eventually become reality.

Eventually I decided to approach a printer friend Steve at Verndadi, and asked him what he uses’s for his estate agent boards, and did they come in 8’x4′ sheets. He said they come in any size you want. Wicked! I measured up my windows, and door and Steve had the sheets cut and delivered the same day. Without hesitation I had the sheets installed, and was proud of my hard work as I stood and looked at the end result, actually not the end as I still had loads to do.

THE DOJO BUILT READY FOR THE INSIDE TO BE WORKED ON

“Ok now I was really excited”

Now I was becomming impatient and all I wanted to do was get me gi on and do kata in my new dojo. But I knew I needed to start work on the inside. Getting the lights up, and the electrics in place, and making it look like a dojo. As it was Spring I had our first session on the bare wood floor, it felt good and everybody who attended said it was like training in a real Dojo.

Sempai Nick came up with a set of matts that the local Leisure Centre were about to dump, and we now have a fully functional dojo. Its a great place to train and has a really good atmosphere, plenty of fresh air, unlike the Leisure centre that we use which is stuffy and stale. I have slowly added training equipment over the last three years, and we now have weights, impact pads and mitts, Jo’s, Bo’s, Bokken’s, Tonfa, Sai, and swords available to use as and when ever we feel the need to hit each other with large wooden sticks.

The outside looks great with my Buddha, and trees, and in the spring when the flowers bloom its our little bit of Okinawa here in the UK.  Since these photos were taken the fer trees have been removed and spanking new fench has been put up on the border. I did like the fer trees though, but they were a bit of a nightmare and needed a lot of cutting back each year.

Since building the Dojo we have had some great class’s and courses here, it is probably the best thing I did, and the time was right for me to build it.

I am glad that I built the dojo, although a solitary experience and back breaking work at times, I found  that my Budo training gave me the spirit of perseverance to continue through the harsh weather, and somtimes frustrating bits of work that did not go as planned.

We have made it our dojo, and we all love training here. Russell has said that once changed and ready to practise its like being transered back in time & space to an earlier age.

JUST A FEW PICTURES OF

STUDENTS TRAINING HERE IN THE UK