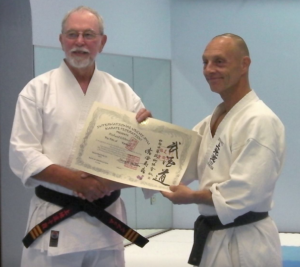 The passing this month of Sensei Richard is not only a great loss for his family and friends but the whole Martial Arts world in general & Bermuda in particular.

Richard passed after a long battle with Cancer.
His practice in Uechi Ryu and Bak Sil Lum Kung Fu has spread over 4 decades. Becoming an early student of Sensei / Sifu Al Wharton when the school consisted of only men. Sixteen Year old Richard joined the ranks and practiced at the Admiralty House moving with Sensei Al to his specified Dojo Bermuda Arts and Fitness Academy on Chapel Road Paget. After roughly 30 years practice he achieved the rank of Godan in 2015.
His dream of owning his own Dojo was achieved in 2010 when Richard
opened MBS at his residence after some renovations and alterations.

Our Condolences to His Wife, children, Mother, Brother and all his Family.
RIP Richard thank you from all those taught by you. Thanks for the good times!!!!
July 23rd 1960-January 8th 2020