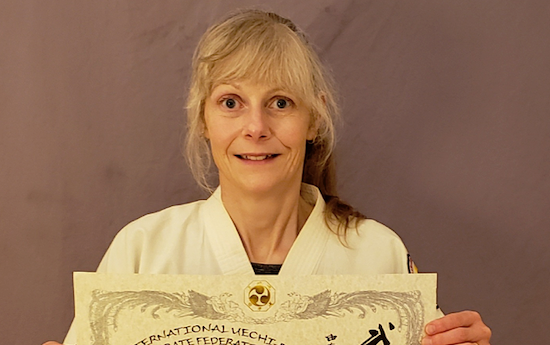 My Journey from Shodan to Nidan 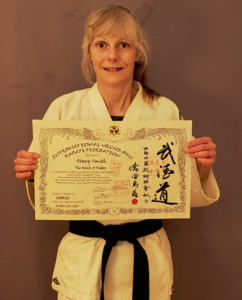 On Monday I was awarded my Nidan. This was not something I had set my sights on when I returned to karate after a long absence. What I value most about this promotion is that it has served to more deeply validate and honor my commitment to Uechi-Ryu Karate.

I first earned my Shodan in Sitka, Alaska when I was 17 years old. I then headed to college and, over the next few years, continued to practice on my own and dabble in other forms of martial arts. But I was unable to sustain this over time and eventually stopped. As the years went by, I often thought about getting back into Uechi-Ryu Karate, but I had no idea how to do this without the support of a community in Anchorage, Alaska where I lived.

A year ago, my sensei from Sitka, Duane Swanson, contacted me out of the blue. He encouraged me to attend Darin Yee’s online workouts, and offered to be my sensei again. I enthusiastically agreed and began participating in all of Sensei Darin’s online sessions, as well as meeting with him and Sensei Duane via Zoom on weekends. After such a long absence from Uechi-Ryu, I struggled to remember and perfect the moves, and to learn new approaches and variations. But I persisted and practiced daily.

It is difficult to express the immense gratitude and admiration I have for Sensei Duane and Sensei Darin–their generosity, kindness, encouragement, guidance, and passion and expertise in the martial arts. I am proud to be a member of the Sitka Alaska Uechi-Ryu Club and the IUKF. If there is one shining light I located in the pandemic, it is my journey back into karate and the Uechi-Ryu community.

Check out the “Virtual” Dojo!