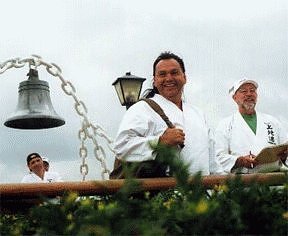 Shihan Jim Maloney called last week and confirmed that he will be teaching at this year’s SummerFest!

In keeping with this year’s theme of "All is in Uechi-ryu", Jim will be focusing on Uechi kata and many self defense applications not usually identified with our kata. Jim will also be demonstrating and teaching a number of interesting variations he sees in kyu and dan kumite.
I’m sure many of our first time SummerFest attendees have heard about Jim’s popular "pressure point" seminars and would be disappointed if Jim didn’t spend some time teaching how Uechi-ryu can be "cranked-up" by targeting pressure points. Jim correctly explained that all moves in Uechi can, with practice, include the use of the most sensitive pressure points taught in his seminars.
Jim has a number of DVD training courses available in the Uechi store. His pressure point course is absolutely one of the best available anywhere. Check them out here!
0 comment 0 FacebookTwitterPinterestEmail