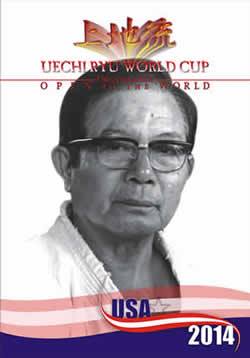 To All Uechi Ryu Karate Do Practitioners and Masters

Through this letter, I have the pleasure to invite you and through you to all instructors and students to participate in the Championships called:

This event will be open to all Schools of Traditional Uechi Ryu Karate-Do, Shohei Ryu, Okinawan and Japanese lines. The overall organization of the Championship is in charge of Uechi Ryu World Cup Organization.

Uechi Ryu World Cup Organization is an organization that promotes the Union of Uechi Ryu style around the World through a global event held every two years. Participation is free and open under the International Regulations that owns the entity.

All lines are welcome to join this movement without any political matters.

Hoping to have you here to create strong spirit and energy

What is Uechi Ryu World Cup and what is the proposal..!

This is what we propose to all of you once again in 2014, Friendship, Exchange, Brotherhood, Union, Respect others, Loyalty to our Karate Style, Honoring those who are no longer with us in body and soul. Just that, can you do it with us..! We wait for all of you…!

Honor, Loyalty, Justice, Compassion, Honesty, Courtesy, Courage, they are the 7 Samurai precepts, this is Bushido, Karate is a Samurai Legacy and this should be shared and cultivate in each practice, something that many people are forgetting … If you practice these concepts within you, You are a Karateka … Uechi Ryu World Cup Organization remind everybody this, if this is forgotten, the practice does not make sense… 2014 is the time to preserve everything with you…

Argentina, Brazil, Mexico, France, USA, Venezuela, Uruguay, Switzerland, Colombia and Italy have confirmed their participation at the 5th Uechi Ryu World Cup for Peace in Miami, June 2014.  Are you going to miss it..? Be with us for the most important event of Uechi Ryu Karate Do outside of Okinawa.  Be a part of the History of our Karate Style. Be there to create Strong Energy, and a good, pure Spirit.  Karate means Empty Hand, “empty” of Evil and Envy. “Do” means “Way”, the way of what is  right, the way of Honor, the way of Truth, the way of  Honesty, the way of Spirituality, respect others, help, energy, humble, these are the principals of the Uechi Ryu World Cup Organization, this is Karate-Do..!   These are the concepts that have been lost and we must recover and protect. Together we can do it if we believe in truth and honor.  Together we must protect the Karate-Do, a Samurai Legacy. Everyone is welcome to participate and be “ONE more” that will do something about it..! Everybody is welcome and free to participate without any pressure, and be Free.  When Sensei Kanei Uechi was alive, he gave us Uechi Ryu karate Do as our Father, meaning we are all Brothers, and Bothers don’t have to fight, they defend the rest of the family. Please, be free to choose to protect our Karate Style, be with all of us at the World Cup, together as family, as Brothers every two years…!

Titles played in the “World events ” are guaranteed and supervised by the following Organizations:

Opening Date and Schedule of the Championship:

Exclusive Services for the Competitor:

☯ Health Care at the Tournament

☯Changing rooms and toilets for competitors.

Services included in the Participation Package / Prices are per Person

Take a look to all the Services you have included in the World Cup Package Registration. Every Package includes the same services; the difference in the price will be depending on the Room you choose.

Option just for US Citizen Competitors

Services included in the Participation Package

Prices are per Person Competitor in US could choose general option

The development of the categories at issue in this championship will be Managed by the Staff of Judges and Referees from Uechi Ryu World Cup Organization, regarding who will be accredited to practice Seminars for leveling will be at the Referees & Judges Seminar mandatory provided for this purpose on Tuesday, June 10th from 09:00 am to 11:30 am and from 2:30 pm to 5 pm .Other organizations will be confirmed at the Seminar  which must adapt their knowledge and experiences to the Rules of these regulations.

The Registrations are open from November 1/2013 until May 10/2014, no extensions of any reason. Competitor is considered registered when have chosen and paid for the package that contains all the services outlined in this invitation and website.

The official categories are published in the Official Website, must complete the form found on the Web Site and e-mail respecting the final registration date.

Notably, in conjunction with the official Registration the owner of each school or each person, must submit an original signed form of “Liability”, being endorsed by the specific case of children under 17 years with the signature of Parent or guardian thereof.

Each competitor shall be registered by his Name, plus they were granted an ID Number that must is stuck in the back of each competitor provided by the World Organization for identification to avoid errors.