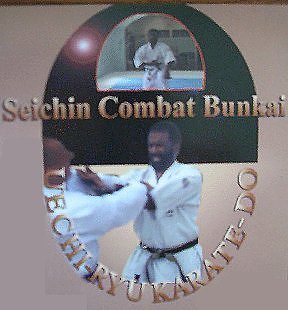 Al Wharton will be at SummerFest

Those of us who were present at Shihan Wharton’s Hanchidan ceremony in 2005, were amazed at the Seichin Combat Bunkai demonstration he gave following the promotion ceremony.

This exciting application of Uechi-ryu’s Seichin kata uncovers some of the mysteries of this amazing kata. Although Seichin is taught to students before Seisan (the second of the big three Uechi forms), many teachers agree that this form is generally under-rated by the Uechi community.

I remembered when Al first questioned me about this complex kata, that pretended to be a green belt assignment. "I’m intreged and fascinated by what I’m discovering hidden within this set of movements", explained Al. "What do you thing about my taking some of what I see in these moves and creating a bunkai"?

Naturally I encouraged Al to "go for it". The reception to the bunkai was so positive at the masters’ celebration that Al decided to publish a professional DVD which was released a few months ago.

I am very pleased and honored to have Shihan Wharton as a regular presenter at SummerFest. Although better known for his exceptional fighting ability and his seminars dealing with drills, techniques and fighting strategies, this year Al will be working with intermediate and advanced students, teaching them his Seichin Bunkai. Don’t miss it!

Fred Channell, another Uechi-ryu black belt who is a regular presenter at SummerFest, will this year be giving the Uechi community insight into how judo strategies and techniques can be incorporated into our training.

A brief description of what Fred will teach at the Summerfest.
0 comment 0 FacebookTwitterPinterestEmail

What a Stellar Group of SummerFest Presenters...