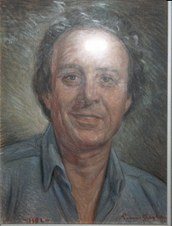 Van Canna died today from Covid 19, after a brief illness. The Uechi-ryu world has lost a true friend and wonderful person.

Van was a moderator for the popular Uechi forum found on this site. He also wrote frequently on a special posting called “For Sale – This Old House”. Below is his last entry, dated December 17th:

I used to climb trees in my garden as a child. I would look down and strangely I had no fear of falling… instead…hanging there I felt sure of myself and omnipotent… so much time has gone by…how long have I lived?

Locked in a glass palace…in the great illusion that this life is…it was not very easy to recall the pleasure of the intense scent of that playroom… a mix of the smell of my toys and the pungent odors emanating from the adjacent kitchen , dining room and the food pantry in one of its corners.

A scent that runs with hyper velocity through the nostrils and opens the chest to a flooding river of genuine sensations and to the noise of the wind blowing through a golden corn field , that moves on as the tide towards infinity.”

I will publish more information regarding funeral arrangements as received.