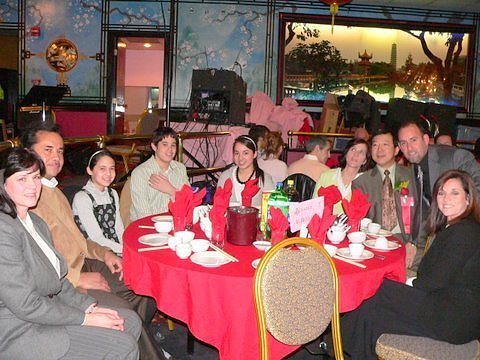 There were approximately 900 plus in attendance.  The cities represented were New York, Atlanta, Chicago, San Francisco, Baltimore, Cleveland, Toronto, Montreal and Vancouver.  Also present were a host of City and State politicians.

The event started with a spectacular lion dance performed by the Gung Ho Club, know as the best performance team in New England.  According to Chinese tradition, only martial arts schools perform the lion dance.  Many of the Gung Ho Club members trained directly under Darin Yee and Gary Wong.

Following the lion dance, we were entertained by professional entertainers from a New York agency which included a belly dancer.  They sang and danced while we were served a stunning ten course authentic Chinese banquet.  I was very impressed by Manny Neve’s children because they tried every dish that came out of the kitchen.  The open Bar offered everything from beer to Hennessey XO.

I’m sure everyone found this to be a new and unique experience.  We are now looking forwards to next year’s event.  There will be a Chinese Mason national convention this year in May.  Let’s see if they will be receptive to a Uechi-Ryu demonstration.
0 comment 0 FacebookTwitterPinterestEmail