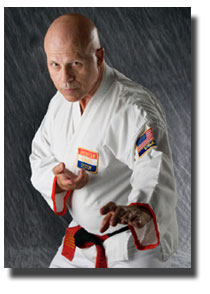 Dear Mr. Mattson,
I do not know whether You have heard this sad news, but unfortunately I have heard about it only today. I have to admit that I was literally shocked by what I heard!
Martial Arts Pioneer Ernest-Ernie H. Lieb – founder of the American Karate Association (AKA) and American Karate Sistem (AKS) Passes in Germany!!! Ernest Lieb, founder and original president of the AKA and the first to run the prestigious AKA Grand Nationals Tournament, passed away on Friday, September 22, 2006 in his native Germany, in a deadly train crash that killed a total of 23 people.
Enie Lieb helped me a lot with various data for my book “Warriors of Chinese Hand”, in subtitle Tode-jutsu Genesis and Expansion, and apart from that he sent to me a lot of material connected to the development of Uechi-ryu Karate in the USA! In that material which consisted of 7 video cassettes (each lasting up to three hours of his private film scenes) which I put in digital form two months ago, i.e. transferred them onto the DVD format, there is a footage of, besides various Karate tournaments 60’s in the USA, fights from Your Uechi-ryu Karate tournament in Boston. The tournament took place, if I am not mistaken, in 1963 and Ernest Lieb was the winner.
I have to mention that in our correspondence he showed extremely great respect towards Your work in Uechi-ryu Karate development and considered you as one of his friends in the martial arts and sports world. Since You have known him for more than 40 years I think that this news is as shocking for You, as well. Unfortunately, the world has lost one of the greatest Karate masters or, to put it differently, a wonderful man who committed his whole life to community work.
Respectfully,
Petar Bogunovic – Pedja
Republic of Serbia
0 comment 0 FacebookTwitterPinterestEmail

What do Sport Fighters and Reality Fighters have in Common?