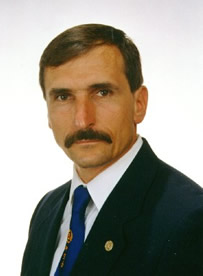 Eastern Arts and Uechi-ryu.com is very pleased to welcome
Iron Arm International and it’s founder, Ihor Rymaruk to our family of site sponsors. Besides supporting this site financially, Ihor will be involving himself with our renovated "On-line" Learning Center and other site activities. For those of you who are unfamiliar with Rymaruk sensei, I’ve posted a small biography of this talented and gifted martial art instructor, author and innovative inventor.

He has received many high praises for the quality of his students and for "having one of the best dojos in the USA" from the Okinawan Masters. In addition to his school, Rymaruk has taught programs at local public and private schools, local community colleges and at Union College in Schenectady, N.Y.. He also enjoys teaching seminars for law enforcement agencies. Mr. Rymaruk has been published in the major Karate magazines, the local press, and has made numerous appearances on radio and television to promote Uechi-Ryu. He had his own television program on cable Channel 8 called "Uechi’s Karate, Art, Health and Self-Defense." He also holds the patent for the Martial Arts Conditioning Hammer, "IRON ARM". In 1995 Master Rymaruk founded the UNITED STATES UECHI RYU KARATE ASSOCIATION.
Master Rymaruk’s personal objective is to maintain a level of instruction for his students comparable to that of the headquarters on Okinawa and to help each student to achieve their personal goals.
0 comment 0 FacebookTwitterPinterestEmail

How Often Do You See This???