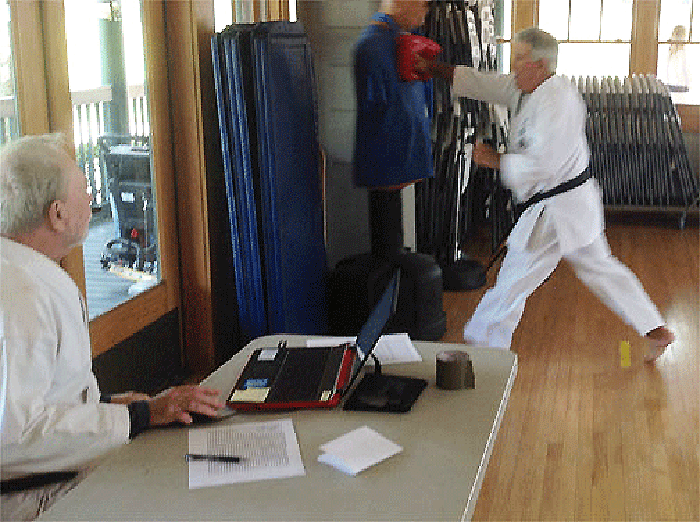 This year’s Winterfest featured, what I consider to be, a very interesting and important self-defense topic and test.The ability to combine a calm alertness with the skill to go from a normal walking or standing posture into a reaction-ready fighting mode able to deliver a strike within a fraction of a second .

I’ve been training my karate classes, using the Herman interactive training system, to accomplish this and have included this program in my own workout sessions.

Herman is a pressure sensor affixed to a target. The pressure sensor communicates with software that can be loaded on any windows based computer system. The program provides a start stimulus using a human voice that begins with the word “ ready.” It follows with “ go”, the trigger to have the participant execute a strike (the anticipatory time frame for “go” varies from 1 second to 10 seconds).

Our test had the subject stand four feet from “ Bob”, a training dummy that supported a pad to which the Herman pressure sensors were affixed. The participant was required to stand in a neutral stance, with feet parallel and arms relaxed along the sides of their body. The attached sensors measured two variables, namely how long it takes a punch to be delivered onto the target (calculated in milliseconds) and how hard the punch landed, measured in “G-force”.

As an incentive to promote maximum effort from our participants, I offered a $20 set of Uechi-ryu pins to anyone who could beat my time and power. I expected to be giving away quite a few awards, but to my surprise (and the surprise of everyone else taking the test), no one came close. Harry Skeffington ran the tests and carefully documented the outcome. I was the 2nd person in line to test.

Before I document a few of the top scores, I want to note that a few of the senior instructors didn’t take the test.  It is also important to note that I had been practicing this same technique in the weeks leading up to this informal competition. Though I didn’t record my baseline starting scores, I believe that I was successful in demonstrating the top score on that day BECAUSE I had practiced.

In my estimation, it is possible to improve reaction time, response time, target focus and impact to a target, starting from a relaxed  body position through the use of data tracking and analysis.

To my knowledge, there hasn’t been any studies or specific information relating to this subject before. Where reaction time and impact have been measured in a variety of different modalities, the ability to move from a relaxed state (alpha brain waves) to a powerful state of directed cognition and counter-attack (beta brain waves) is the missing link in effective self defense training. I took the initiative of building a training program around this subject, a program that I call, “Hit Fast – Hit Hard”!

I began experimenting with this subject over five years ago when I purchased the first “wired” Herman Trainer. Herman had the ability to measure the speed and g-force of a strike from an anticipated but erratically determined start. I modified my karate classes to include different speed and timing drills and measurably noticed dramatic improvements in time and power test results.

Herman’s versatility and mobility has improved over the years. The system now allows for wireless communication between the sensors and the computer interface. Static striking and live sparring are now a reality. This year’s was the first time I tested the results on a group of traditionally trained martial artists who are considered exceptionally skilled. But because Herman is an emerging technology, none of them had ever taken this or a similar test.

I noticed several wheels turning with the introduction of an evidence based system with the potential of improving human performance.

What can be extrapolated from this experiment that might be beneficial to the martial arts or any self-defense program?

Perhaps you have seen the grotesque new game that some segments of American youth are playing with unwitting participants. It’s called knockout (or polar bear hunter) and it goes something like this. An unsuspecting victim is walking down the sidewalk with no particular purpose in mind (alpha brain) when they are approached by a young person (surreptitious attacker – beta brain) who is usually competing with a friend(s) for the most knockouts.

Without warning, the attacker launches a vicious head punch at the unsuspecting passer by, catching him or her completely off guard. It is usually a devastating blow that causes severe injuries and sometimes even death. Youtube is full of these images if you can stomach it and care to see it first hand. There is also dash cam video of police officers being brutally knocked out by sudden aggressive attacks during roadside stops. Perhaps you yourself have been struck by a friend who suddenly and without warning playfully gut punched you when you weren’t ready in order to “test” your martial art skills. In all of these cases, a window of opportunity existed due to the complex action/reaction sequences that are necessary to respond to active threats.

I strongly believe that no matter what self-defense techniques, movements or skills you develop and attain, if you are unable to recognize impending danger signals, prime your response (move from alpha to beta) and execute skills that hit fast and hit hard — before your opponent strikes you—  any chance for an effective defense will be negated by an opponent’s first strike.

Viewing a sampling of the video taped attacks posted on YouTube, I recorded the times it took the attackers to execute their punches. I measured the moment when the intent to deliver the punch was first made noticeable (perceptually evident) until the moment that the punch actually landed on the victim (contact).

In most cases the victims were knocked out by a single punch due to the unobstructed targeting quality of these well placed sucker punches. From the wind up/loading period of the punch until the blow made contact, the punches I measured where on average 1000ms (1 second). Some where much slower, exceeding 2000ms (a full two seconds). It is possible that the victims actually saw these extended movements (reaction times is generally considered to be approximately 250ms), there was certainly enough time to, but it was clear that they did not react to avoid, block or deflect the attacks.

In all cases not a single defensive movement on the part of the defender was noticed, including the trained police officers—which I found surprising. It is likely that the victims I observed on video simply could not make sense of the attack, given the bizarre contextual way in which it was delivered. The martial arts, if it teaches anything, must teach vigilance. Not hyper vigilance, mind you, but the recognition that someone entering your personal space my present a sudden unannounced danger.  Readiness is the “martial” part of martial arts while the ability to respond effectively, by hitting fast and hitting hard constitutes the “art” part.
I know there are many very capable self-defense instructors teaching very effective skills to their students, but all potential aggression scenarios must consist of the student mentally preparing for the attack by recognizing first that they are in danger. “OK, get into your fighting stance, guard up” is unfortunately not the normal fight scenario civilians or police officers encounter.

If we can instill the fighting tools along with the ability to implement these tools FAST and with POWER, we give our student better odds in a real life encounter.

Here are the top results in the Hit Fast – Hit Hard testing at the 2016 Martial Arts Winterfest in Mount Dora, Florida.

ps. Special to my students and martial art friends:
We are offering a 1 sensor Herman package to readers of this newsletter for only $125. Free shipping within the USA.
E-mail me for information at gmatson@uechi-ryu.com